In mimicking the logics that have underwritten the carbon economy for the last three centuries, renewable energy transitions risk repeating old conventions that end in ruin. 1

In 2018, the world was introduced to a Norwegian energy company named Equinor. Though the name was new, the company was not. Prior to 2018, Equinor operated as Statoil, Norway’s state-owned Oil and Gas major operating in 32 countries around the world. The company’s reemergence from a boardroom-chrysalis seemed to carry more than aesthetic change into its operations. It was also accompanied by an updated mission statement: “We are engaged in the exploration, development, and production of oil and gas, as well as wind and solar power.” 2 Though it nods toward a growing renewable energy market, the statement is one of the first to explicitly imagine an energy transition led by green capital from within a fossil major. It implies an additive process rather than one of fundamental restructuring. Wind and solar power would be added to Equinor’s oil and gas operations, not replace or supplant them. Equinor even adopted a new term for this expansion, codified on their website as a transition from being an “oil and gas company into a broad energy company.” Anticipating the growing chorus of supply-side, “keep it in the ground” activists arguing for a world without fossil fuel extraction, Equinor, like many other fossil majors, is now positioning itself as an energy company, rather than a fossil fuel company. In doing so, it is arguing that fossil majors—perhaps the single greatest contributors to the ongoing planetary climate crisis—are a key instrument in the path toward a post-carbon future. 3

At a glance, Equinor’s announcement might seem worthy of plaudits. Driving investment into wind and solar energy is a good thing and could be read as the beginning of a kind of market correction—a fundamental shift in business practices as the rising costs of fossil fuel extraction and processing become untenable for companies and consumers. But, crucially, Equinor’s statement is not evidence of a major shift in its or any other fossil major’s operations. Rather, it is simply the latest in a long line of investments in advertising and public relations—more of a precursor to a new ad campaign than anything material. Put another way, this is a rebranding exercise for Equinor, made clear on their homepage which loudly proclaims that “the energy transition is the defining opportunity of our time.” 4 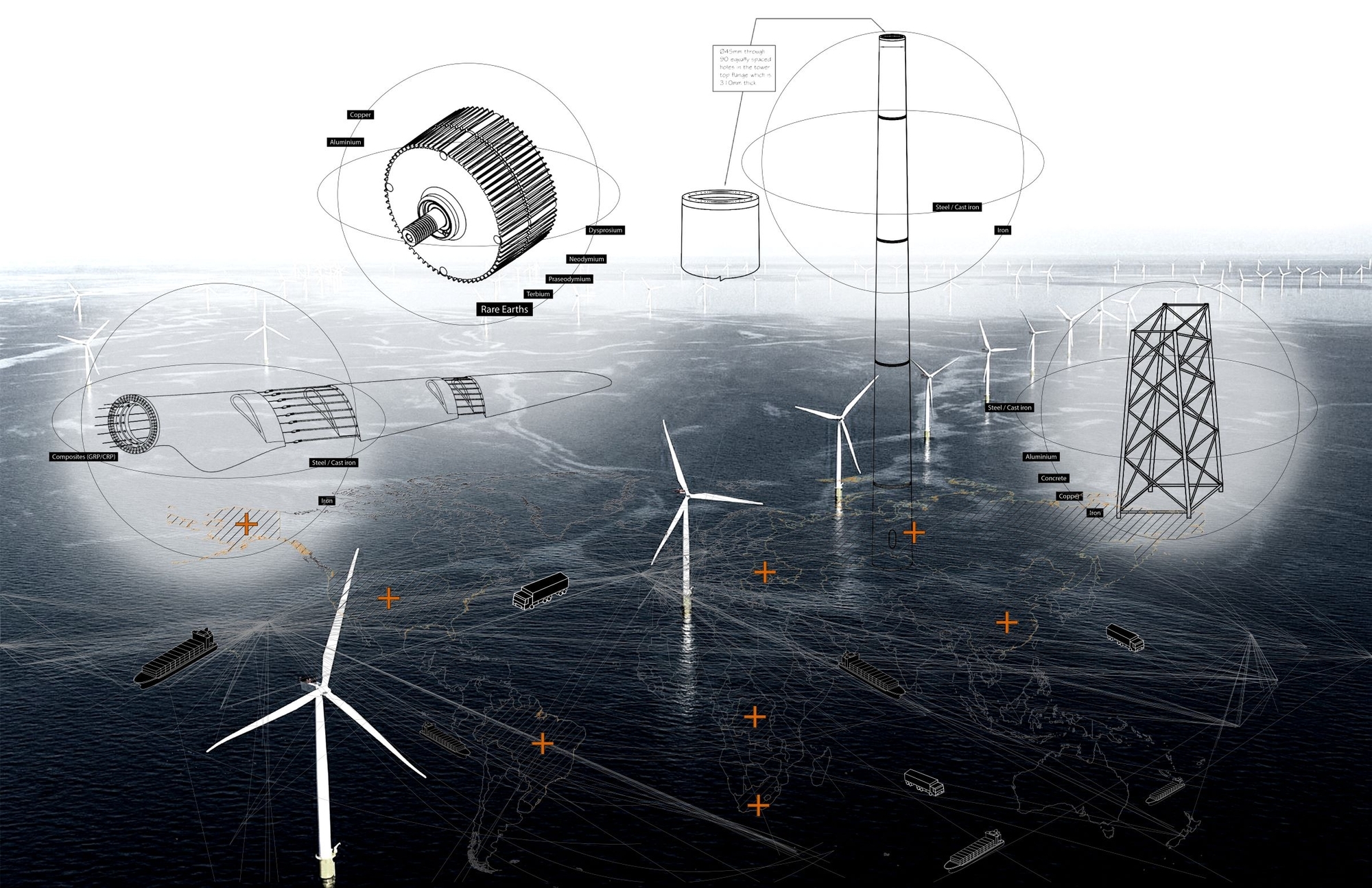 Wind turbines are themselves complex assemblages of material components that are set to be extensively distributed across the globe. Their deployment is undergirded by well-meaning national policies courting clean energy and oil and gas companies attempting to “green” their image. The clean energy transition cannot only benefit those who have caused the Climate Crisis.

Equinor sees the Climate Crisis, one that they helped manufacture, as an opportunity to increase shareholder value through the energy transition. The surreality of such blatant corporate gaslighting aside, for Equinor, and the many other oil and gas companies following a similar path—massive investments in advertising and public relations, a pittance in actual renewable power research, development, and deployment—these interventions are aimed at shifting public opinion. They are not credible plans to decarbonize the economy. The top five oil and gas companies in America, Exxon, BP, Chevron, Shell and ConocoPhillips, spent a combined 3.6 billion dollars over the last 30 years on marketing efforts that promoted their morality, the importance of oil and gas production on advancing society, promoting clean coal and natural gas as a bridge to the future (a line later adopted by President Barack Obama), and spreading disinformation about global warming and their role in exacerbating it. 5 That $3.6 billion figure does not include more recent rebranding efforts at Exxon-Mobil and other fossil majors to project a new image of the company as a major investor in green technologies that is completely divorced from reality.  This mode of greenwashing has received considerable attention in climate and environmental media—much of it led by investigative journalist Amy Westervelt. In season three of the Drilled podcast, Westervelt expertly traces the birth of public relations to the oil and gas industry, linking together disinformation campaigns by the tobacco industry with the tactics of oil and gas giants—both of which involved the same firms and principals.

In most fossil majors, renewable energy investments comprise less than 1% of their annual budgets. Billions, however, have already been spent on marketing, branding, and lobbying campaigns aimed at softening their public image and convincing people and lawmakers that these companies are leading an energy transition—one they are actively fighting in private.  Robert Brulle, professor emeritus at Drexel University, has built a body of scholarship revealing the direct relationship between fossil fuel advertising and pending action and hearings in Congress. 6 Fossil majors engage in this kind of duplicitous behavior because they know that it works.

In 2017, BP launched its first major ad campaign since the post-Deepwater Horizon oil spill advertising campaign (that campaign approached $100 million). The company touted its new role-out of green energy investments totalling 500 million dollars, including a 200 million dollar investment in solar energy company Lightsource. Left out from these astoundingly large numbers and the advertising campaign, are its parallel investments in oil and gas, totalling 16 billion dollars. That disparity and disingenuous advertising did not go unnoticed, as activists and academics publicly rebuked BP’s claims. 7 This kind of accountability represents an existential crisis for the oil and gas industry. Shell CEO Ben Van Beurden, channeling the urgency of defeating these activists and academics, argued in the 2019 quarterly earnings report that oil and gas companies need a “strong societal license to operate,” one that could dissolve if their advertising campaigns failed to sway public opinion. Beyond refuting the advertising campaigns of fossil majors, climate activists have also begun organizing the workers at large PR firms to part ways with their lucrative, long-term oil and gas clients. Their efforts have even contributed to the ousting of firm executives who otherwise refused to entertain such demands from their workers. 8

The dynamics of financialisation have made private investors utterly unfit to bankroll a transition, the chase for instant profit taking them even further from a super grid or offshore farm. 9

Even if their claims of mass investment in renewable energy were true, simply replacing one form of extractivist practice with another does not align with the broader aims of an internationalist Green New Deal. Doing so requires grappling with questions of ownership, the role of the state and industrial policy in driving a just transition, and a global, national, and local restructuring of power dynamics around the principles of energy democracy. 10 Cymene Howe in her book Ecologics: Wind and Power in the Anthropocene points to the expansion of wind energy generation in the Oaxaca region of Mexico as a driver divorcing local people from their land, and from their wind. For Howe, “Anthropogenic impacts from energy extraction, production, and use have surfaced the reciprocal relationships between excess and deprivation, and they have become harbingers for the unsustainable logics that have driven petromodernity.” 11 This certainly reflects the experience of U.S. farmers throughout the Great Plains. There, the new agricultural commodity is wind—which, at best, nets $3-7,000 per year for the average farmer—while energy companies like Equinor operate and benefit from industrial-scale wind farms and claim credit for greening their business practices. 12

Howe’s concern with deepening ruts of excess and deprivation resulting from the clean energy transition are coming to bear for rural communities across the globe. The low price to rent land from farmers is offset by an extreme profit margin, reaching, on average, at least 2200 times the operating cost after the initial investment is recouped. 13 Some farmers and ranchers see their newfound crop, wind, as a stabilizing source of income in the turbulent global agricultural economy. 14 The insidious, extractive aspect of Broad Energy Companies comes from their role in worsening the Climate Crisis. The ill effects agricultural production faces from a warming planet and shifting climatic zones are certain to weaken the economic stability of farmers and ranchers. 15 Energy conglomerates that still operate oil and gas mining and production facilities and are investing in industrial-scale wind farms are simultaneously threatening farmer’s traditional livelihoods and taking advantage of the climatic uncertainty they have caused. Broad Energy companies are able to open up new frontiers of extraction, in large part, because of the harm oil and gas extraction has wreaked on the global climate, and by extension agricultural production.

The focus on renewed forms of extractivism should not be read as a rebuke of widespread deployment of wind turbines, but as a means to ask a series of critical questions: Who is (and is not) receiving the surplus value of wind? Who is being freshly trapped in existing paradigms of resource extraction? And what geographies are tied together by existing raw material supply chains and the locations of clean energy infrastructure?

While wind energy is a necessary component of a just transition, there is not a technological fix for the Climate Crisis. These gridded landscapes of rhythmically spinning turbine blades are undergirded by complex assemblages of supply matrixes, whirring pillars of material from a diffuse, unevenly distributed territory of rare earth elements and exploited labor.  But the story of wind power is less about raw materials than it is about the reproduction of extractivism and global capitalism that it appears to portend. Take for example, RWE (Rheinisch-Westfälisches Elektrizitätswerk) Energy, a 120 year old energy company headquartered in Germany that operates the largest onshore wind farm in the world, located in West Texas. Like Equinor, RWE recently restructured themselves, allowing them to proudly claim, “From day one, the new RWE will enter the race as one of the international market leaders in the field of renewable energy.” 16 Buoyed by a massive cash flow from its oil and gas operations, RWE—like other broad energy companies—are attempting to dominate clean energy markets and diminish competition from new companies and public sector agencies.

States and economic-unions have also shown an explicit interest in controlling the flow of core raw materials deemed critical to the implementation of sustainable energy sources and technologies. In the case of wind turbines, rare earth metals are necessary to produce a permanent magnet housed in the nacelle, or outer casing for the turbine engine. Wind turbines typically use NdFeB magnets containing neodymium, praseodymium, terbium, and dysprosium. 17 Praseodymium and terbium are mined in several countries, while neodymium and dysprosium are mined almost exclusively in China. Changes in the available supply of rare earth metals has sparked concern from governmental bodies about the continued availability of these key resources in the clean energy transition. A report from the European Commission, “The Role of Rare Earth Elements in Wind Energy and Electric Mobility”, is aimed at securing continued priority access to these isolated supplies of rare earth minerals. The report explicitly states: “If [rare earth element] value chains remain undeveloped or, worse, move more towards non-EU countries, this may have an impact on the European economy and on the employment perspectives linked to the green transition.” 18 Focusing on national, or regional, resource procurement over the advancement of a global energy transition only serves to put the word ‘green’ before extractive energy, a practice that Howe cautions against: “renewable energy transitions risk repeating old conventions that end in ruin.” 19 Green extractive logics might solve the climate crisis, but they will do little to improve the lives of those who have already been unevenly burdened by petro-nation states, and the extractive practices that have fueled their wealth and the Climate Crisis. Ensuring that the energy transition is just demands an end to these extractive logics, and an expulsion of once-oil-extractive companies from the market. 20 Howe, again, succinctly highlights the problem on a global scale saying, “there will be no ‘renewable energy transition’ worth having without a more holistic reimagination of relations in which we avoid simply greening the predatory and accumulative enterprises of modern statecraft and capitalism.” 21