The problems of peak oil and climate breakdown are connected, as both arise from and threaten the modes of social life created using fossil fuels. 1

Much of the global energy system is organized around a set of relations, speculations, and operations tied to subsurface deposits of oil and gas often referred to as “reserves.” But what, precisely, is a reserve? Oil and gas reserves are not merely passive, subterranean deposits beneath the surface waiting to be discovered, exploited, and converted to fuel. Rather, they are assemblages of knowledge, technology, and political economies that are actively and purposefully constructed in order to imagine and maintain a complex of interests bound up in the burning of fossil fuels. 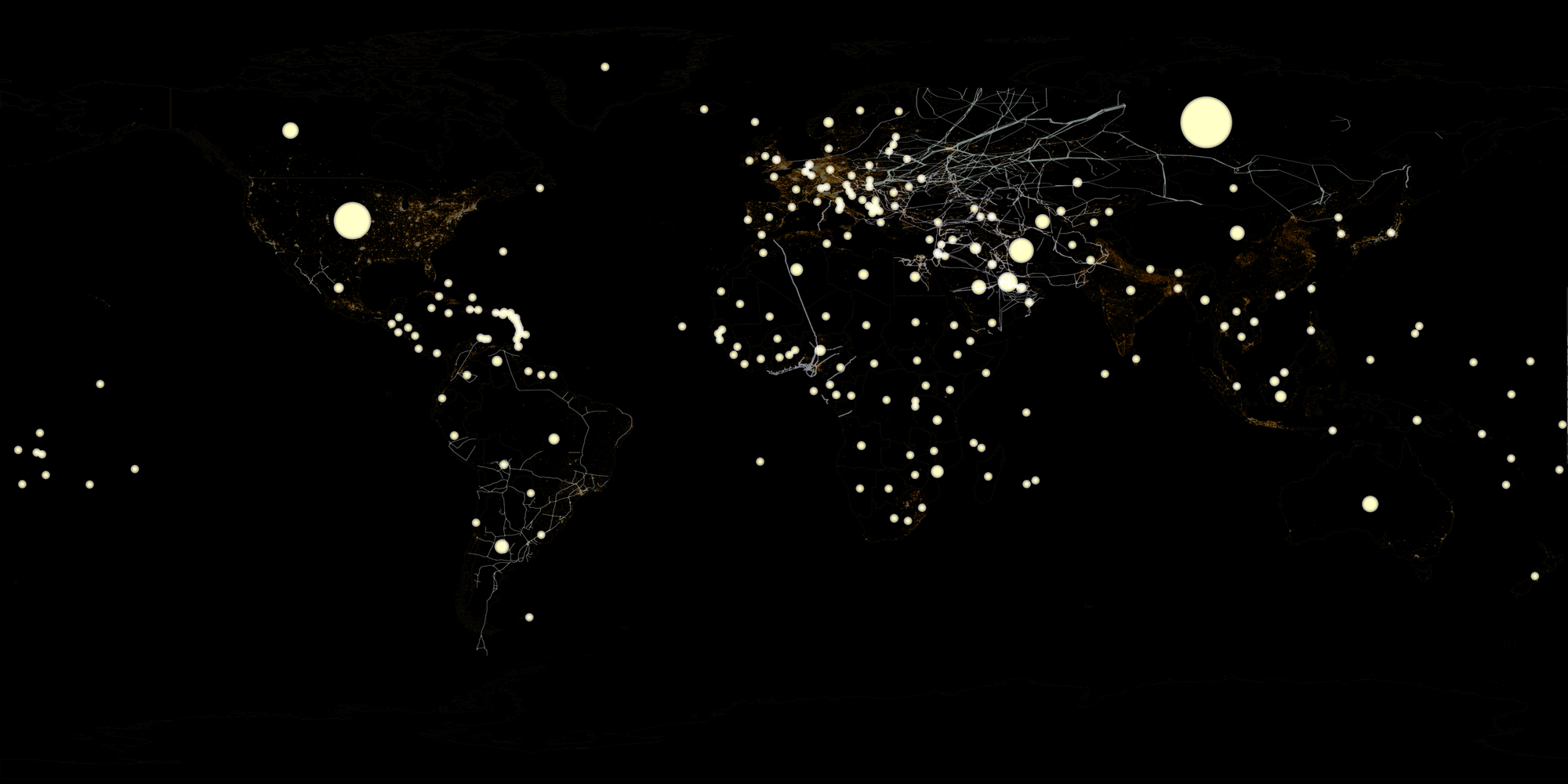 In this map of the globe, the recoverable quantity of documented and expected future reserves are mapped loosely to individual countries alongside the transnational network of built or planned oil and gas pipelines.

We refuse to map oil and gas reserves as a cartographically precise set of extractable resources that oil executives, policy makers, and governments can organize and create political economies around. Continued speculation over fossil fuels is antithetical to an internationalist Green New Deal. Instead, expected technically recoverable quantity of documented and expected future reserves are mapped loosely to individual countries alongside the transnational network of built or planned oil and gas pipelines. A base map of global GDP without national borders or a land/water distinction highlights the role of capital in strategizing and mapping reserves as a commodity. 2

The concept of a reserve and its embedded resources implies a kind of static, unidirectional relationship. 3 When a resource is detected—either through empirical sampling or predictive modeling—it is catalogued, mapped, and officially reserved. Reserves are mediated through technological, political, and cultural conceptions of detectability, framed as objective maps or catalogues of the world despite their deep ideological underpinnings. In fact, the discipline of geology emerged in the nineteenth century for the express purpose of discovering and managing fossil fuel reserves around the world. 4 Once reserved as a resource, the fossil fuel deposit is treated as inert. Its only purpose is then instrumental—to be extracted, processed, and put toward productive, commercial use. Questions of what those reserves could or should be used for, whether community and/or democratic control of their extraction and use, and the inter-scalar consequences of “running an economy on energy sources that release poisons as an unavoidable part of their extraction and refining” 5 are rarely, if ever, considered. Once oil and/or gas deposits are detected or otherwise speculated beneath the surface, they are generally placed into one of three knowledge taxonomies that define thresholds of certainty about where the oil is, its quantity, and its recoverability: Oil-in-place (low certainty), or a geological analysis revealed that some oil is probably there, but precisely how much remains unclear, and it is unknown whether or not it is economically recoverable; Unproven reserves (medium certainty), or when the oil is detectable, its relative quantity is known, but its recoverability remains uncertain; and Proven reserves (high certainty), when the oil has been detected, its quantity is known, and it is economically recoverable.

The movement from Oil-in-place to proven reserves is fundamentally a knowledge practice, underwritten by massive investments in research and development for new extractive technologies intended to transcend “thresholds of detectability”. 6 The rise of hydraulic fracturing and deep sea drilling are direct results of pushing the envelope of these thresholds in attempts to reframe not only how oil and gas are retrieved, but how they are geographically, geologically, and politically known. This subsequently creates profound path dependencies for energy futures, as newly detected recoverable oil locks in knowledge about potential energy in reserve. This creates a kind of technological path dependency, as increasing investments in extractive technologies like hydraulic fracturing and deep sea drilling incentivizes companies to search for oil and gas in new places, and to develop new technologies to get at previously unrecoverable resources. Currently, big tech companies like Google and Amazon are developing artificial intelligence and machine learning technologies to assist in future oil and gas speculation. 7 The identification of resources and the construction of the reserve system is, among other things, an attempt to justify and give order to a global political economy powered by fuel sources that require death and destruction. It also reinforces a linear narrative about how and why energy systems develop that obscures and naturalizes the operations of the fossil fuel industry. In that narrative, oil and gas are out there, in the ground, awaiting discovery and extraction, and otherwise destined to power growing consumption patterns across the planet. This presumes that as reserves dwindle, the world will be left hoping for a technological breakthrough—something like thorium nuclear reactors championed by ecomodernists—or resigned to managing the decline of an energy-poor society. These persistent energy anxieties manifest recycled nationalist calls to combat energy scarcity and increase energy independence through the ever-present fear of “peak oil”—a fear cyclically promulgated as far back as oil’s chance discovery in Pennsylvania in 1883. Collective fear of peak oil has always carried with it the development of new technologies to detect oil and gas on new extractive frontiers, and the express political will to enact violence on and through these frontiers–all to catalog, claim, and set aside reserves for energy futures yet to come.

Peak oil is not so much a geological problem as a political one, more reflective of the contemporary economics and technologies of detection than of the oil itself. As such, peak oil crises often presage expansions of technologies of detection and extraction, and geographical reorganization of the industry. After the peak oil crisis of the 1970s, the political economy of the industry reorganized around newly detected oil fields in the Middle East. The early 2000s saw similar anxieties, and brought with it the hydraulic fracturing boom in the United States. 8 While this narrative has long proven politically expedient to advance nationalist agendas for energy security 9 , it does not reflect the material reality of how oil and gas reserves come into being. In fact, as demand for crude oil continues its annual creep upward (by roughly two million barrels a day since 2009) 10 oil and gas reserves are simultaneously expanding, as new extractive technologies promote new discoveries, and fields thought to be exhausted suddenly become productive again, whether through hydraulic fracturing, CCS-driven enhanced recovery drilling, or other means. From the exploitation of tar sands in Alberta, to shale oil in North Dakota, to deep sea drilling in the Gulf of Mexico and beyond, the last two decades have seen a radical “upgrading and up-scaling of large-scale industry” (Arboleda 2020, p. 26) that has intensely reinvigorated the fossil fuel industry, nearly doubling global crude oil reserves from 1 trillion barrels in 1990, to over 1.75 trillion in 2020. 11 Since oil and gas do not effectively come into being as useful commodities until detected and reserved, an internationalist Green New Deal should move beyond simple calls to keep oil and gas in the ground, and instead focus more intently on the political-economic and epistemological processes of reserve-making. The energy transition is currently calling into being new kinds of reserves. The International Energy Agency released its 2021 report on the role of critical minerals in green energy, and concluded that reaching net zero carbon emissions by 2050 will require upwards of six times the mineral inputs currently circulating today. 12 These forecasted needs have prompted a mad scramble for minerals like cobalt, nickel, lithium, and rare earths, reconfiguring the political map of energy reserves in the process. These new processes and political economies of green energy reserve-making largely resemble those of the oil and gas industry–transnational extractive corporations operating at the “thresholds of detectability” 13 , ordering resources in particular ways, for particular people, and designating sacrifice zones in the process. Beyond calls to “keep it in the ground”, attending to the knowledge practices undergirding oil, gas, and mineral extraction call for redefining both energy’s role in a sustainable society, as well as what energy is in the first place, and where it comes from.

Geology is a relation of power and continues to constitute racialized relations of power, in its incarnation in the Anthropocene and in its material manifestation in mining, petrochemical sites and corridors, and their toxic legacies—all over a world that resolutely cuts exposure along color lines. 14

If an internationalist Green New Deal is to be successful, it will have to move beyond supply side demands to keep fossil fuels in the ground, though doing so is clearly a necessary, if insufficient, aspect of such a program. Its program must also question the idea of the reserve—a concept that, at its core, is more than a spatial variable or indicator. In the global energy system, reserves represent an ordering logic that shapes ownership over and profit from resources, creates and maintains new forms of commodification, and naturalizes the kinds of extractive supply chain capitalism and geographies of extraction described in Martin Arboleda’s Planetary Mine. 15 Reserves are also a transposable concept, one that is already being applied to so-called rare earth minerals, often in the hopes of prefiguring a new form of clean energy extractivism, in which the resources of Global South nations are appropriated for an energy transition in the Global North. Lithium, cobalt, and other rare earths considered crucial to a just transition are already being measured, mapped, and ordered through the concept of reserves.

As with oil and gas extraction, vast geographies across the Global South are being organized for mineral extraction in service of the energy transition. Indigenous communities bear the brunt of these processes. From the rampant droughts on indigenous lands due to water-intensive lithium extraction in the Atacama Desert (one of the driest places on Earth) 16 , to the ongoing struggle over rare earth and uranium extraction in South Greenland 17 , global indigenous communities are increasingly positioned against neoliberal imaginaries of green energy that propose the transition as a 1:1 replacement for the current fossil-fueled economy. These imaginaries are not at all transformative, and work hard to smuggle practices of reserve-making into a transition that must be about so much more than simply energy. Reserve-making is an object centered practice, premised around ideologies of taxonomic security and control. Rather than detecting, cataloging, and reserving resources, a just transition should focus instead on the relations these processes enable and disable, foregrounding ethics of community consent for extraction, and reimagining what energy futures can look like, beyond simply replacing fossil fuels with green energy. Just as fossil fuels enabled certain relations and a specific kind of modernity 18 , so too can the energy transition foster new and more equitable relations, and different modernities—but only if the toxic practices of reserve-making are reimagined.