Imagine for a moment that, upon opening the door of the Pharaoh Khufu’s tomb at the heart of the Great Pyramid of Giza, archeologists did not find the mummified corpse of a god. Imagine instead that they found a lead-lined chamber that housed a small steel canister with a yellow and black insignia forming three wedges around a single black dot. Archaeologists may have believed this to be a newfound symbol—yet another glyph in the pictorial language of early Egyptians. Only upon opening this canister would the group have realized they were being exposed to death, the destroyer of worlds, manifested in the warm glow of decaying radioactive material.

While this might sound preposterous, it is a future that our recent history—and ongoing present—have prefigured for our descendants. Every person to live from 1945 onward has lived on a planet beset by the spectre of nuclear catastrophe. In landscapes large and small, visible and obscured, nearly every attempt at building permanence is set in the shadow of a nuclear event. The construction of so-called “hardened targets”, bunkers and fallout shelters, and countless other forms of surveillance and emergency preparedness were and remain tied to it. 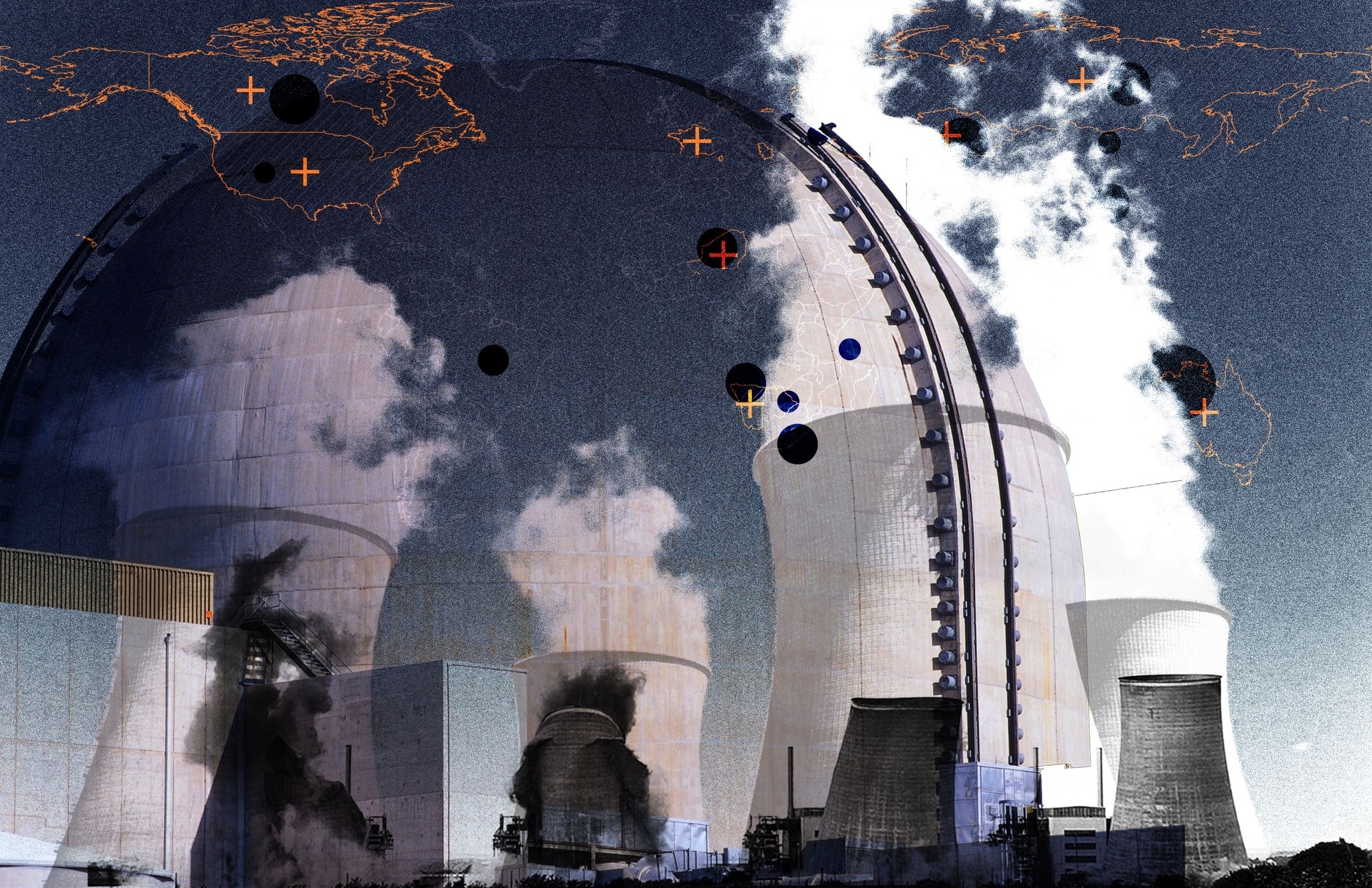 Nuclear energy is touted as a sustainable energy because it only releases steam out into the atmosphere. However, sustainability demands managing a system throughout its entire lifespan, an impossibility with nuclear waste as it remains harmful for over a million years. Nuclear energy, without fail, produces nuclear waste. Entombed in concrete casings, these artifacts fatally undermine the supposed cleanliness of nuclear energy.

This hardened, militarized state departs radically from that of the Egyptians. The rulers of ancient Egypt were attempting to convey their own power and immortality through their grand architectural works. They were not, as we are, attempting to contain a manufactured weapon of mass destruction that would outlive them by millennia. The Egyptian pharaohs were responsible for maintaining the ma’at, or the fundamental ordering of the world, and as the offspring of Egyptian deities, rulers were considered the god-like link between humanity and the gods. 2 As gods on Earth, a pharaoh's life would naturally extend beyond his time here on Earth, often resulting in an obsessive preparation for the death rituals that would usher him and his closest kin into the next phase of an immortal existence. 3 The body, and its organs, were believed to be important objects in the afterlife, and their preservation and protection posthumously became increasingly important in the lives of Ancient Egyptians. Elaborate royal tomb complexes known as mastabas were constructed out ofstone, granting notoriety to Imhotep, who is widely considered the first architect and who subsequently attained the status of a demi-god in Egyptian culture. In the Old Kingdom, 2686-2181 BCE, the desire for grand tombs reached their peak with Khufu commissioning the Great Pyramid of Giza, with his son and grandson constructing the smaller two pyramids at Giza. 4 The tombs conveyed the immortality of the Pharaoh's reign and power, and preserved his body, organs, and belongings for the afterlife. For the last 4500 years, the pharaohs have done well in projecting their own immortality through vast architectural works.

The permanence of the contemporary built environment has shifted from projections of immortality to an ideology and aesthetic of securitization.  But Egyptian entombment and nuclear-hardened built environments share more features than one might assume.  Indeed, it is not a coincidence that the radiation-protective cage for Chernoybl’s reactor number 4 is called a Nuclear Sarcophagus. 5

For much of the Cold War, wealthy nations invested heavily in these kinds of protective infrastructures. The prospect of a nuclear war between the U.S. and the Soviet Union catalyzed one of the largest, most expensive investments in the built environment at a global scale. Much of that infrastructure remains, though it is unevenly distributed. For instance, Switzerland has enough nuclear fallout shelters to protect 114% of its population; 6 Sweden can protect 81% of its citizenry (leaving 3 million unprotected). 7 Germany conversely, can only protect 3% of its population. Most of its shelters are located in West Germany. 8 The Chinese government built a series of tunnels and shelters sprawling under Beijing, known as the Underground City, between 1969 and 1979 to protect its people as relations between the USSR and China deteriorated. 9 In D.C., civil defense agents sought to achieve a shelter space for any person in the city, regardless of where they were at the moment of attack. This required converting many spaces (schools, apartment basements, churches, civic buildings, etc.) into fallout shelters spread throughout the city. 10

Now I am become Death, the destroyer of worlds.

In the rest of the U.S., nuclear protection required providing a geographically dispersed set of small shelters. The focus on fallout shelters in capital cities overlooks the real threat of a nuclear attack on politically central cities. A nuclear attack in DC would decimate much of the city upon impact, leaving little option to shelter in place from the residual radiation after the blast. After the disarmament talks in the 1990s, fear of nuclear attack has generally fallen, although fears spiked again during President Trump’s erratic time in office. 11 Many of the world’s fallout shelters still exist in a decommissioned state as the design life of the structures lapse and the rations inside expire. The rise of nuclear energy, and its failures, has given rise to a new, radically restructured built environment—one that stretches well beyond the sites where nuclear material is mined, converted into electricity, and then disposed.

Modern methods of nuclear energy production are not optimized to produce energy from the entire lifespan of radioactive decay. After the initial surge of heat that spins turbines and produces energy, radioactive material becomes waste and is stored in leaden chambers to decay. Today, all nuclear reactors in the US are required to store their waste on site in dry storage. Sites like Yucca Mountain Nuclear Waste Repository, a site funded in 2002 and decommissioned in 2011 to hold spent nuclear waste, were designed to store large quantities of nuclear waste in a single, secure location. 12 A similar site in France, Cigéo, is expected to open in 2025, and is designed to store spent nuclear fuel at a depth of 500 meters. 13 The success of long term storage sites is dependent on identifying locations that are considered geologically stable enough to house nuclear waste between 10,000 and 100,000 years—though some estimates dictate that secure storage should be planned for 1 million years, the point at which radiation levels become non-lethal. 14

Unlike the other assemblages of the Field Notes’ Supply Matrix, nuclear energy’s material flow exists on a time scale beyond the entire history of humans. For its proponents, nuclear energy is a ‘clean’ energy because it only emits steam (zero carbon), is one of the densest and most abundant energy sources, and it has a smaller energy production to land use ratio than other ‘clean’ energies. Interestingly, the US Department of Energy touts the physical scale of waste as an achievement, noting all the nuclear waste produced in the US could fit on a football field at a depth of less than 10 yards (9.14 meters). They go on to say, “waste can also be reprocessed and recycled, although the United States does not currently do this.” 15 However, France, a nation that does recycle its nuclear energy, still produces nuclear waste at high enough levels that it will require geologic storage as a result of its nuclear energy production. Nuclear waste is an inevitability of nuclear energy, as Roman Garcier notes in his study on the geographies of nuclearlity, “recycling spent fuel enables utilities to postpone and displace the time and place when and where the disposal of radioactive waste will take place.” 16 Complete recyclability of spent nuclear fuel is a myth, spoken of as a means to make an unmanageable waste product comply with an image of sustainability. When the time-scale of uranium’s complete radioactive decay outlasts by a billion years the material lifespan of human-constructed objects, how can it be considered sustainable?

Nuclear energy proponents and representatives of a sustainable nuclearity must overcome two fears, one of the human and one of humanity. On the account of the human, the fear is bodily, spawned by the horrors of Chernobyl, subsequently followed by repeated scares at 3 Mile Island and Fukushima, and compounded by decades of media portrayals of unsuspecting people's transformations into monsters and superheroes from contact with nuclear material. While for younger generations, media portrayals of nuclear societies and nuclear exposure constitute their exposure to life in a nuclear nation, for people who lived through the Cold War, the fear of nuclear attack and exposure was a lived experience. The classroom became a site of civil defense training as Duck and Cover drills were implemented across America to train young citizens how a desk would protect them in the event of a nuclear attack. 17 Civil alert systems were implemented across the nation to quickly and publicly notify citizens of incoming missile strikes. Life in a nuclear nation at war, and the fear that came with it, became a regular feature of public life during the 1950s. By the 1980s, public faith in civil defense efforts was beginning to wane, with the state of Washington passing a law that prevented public campaigns for planning nuclear attack preparations. 18 During the Trump administration, largely fueled by rising tensions with North Korea, Cold-War era preparation systems began to be tested across the world: Missile alert systems began testing in Hawaii, leading to a disastrous false alert of an incoming ballistic missile containing the phrase “THIS IS NOT A DRILL”; 19 Moscow began an inventory of its fallout shelters and reinstituted chemical and nuclear drills for some 40 million citizens; 20 Sweden began updating their stock of nuclear fallout shelters. 21 Nuclear fear is on the rise, and perhaps unfairly, nuclear energy must overcome this embedded fear and prove it is safe. In the United States, this effort is overseen by the Nuclear Regulatory Commission, while internationally, the International Atomic Energy Agency (IAEA) and the Nuclear Energy Agency (NEA), monitor the 440 nuclear energy reactors from their headquarters in Western Europe. 22

The IAEA and NEA work to ensure that the international community is sharing the latest knowledge and safety protocols across national agencies. In 2019, eleven of the twelve countries that relied on nuclear energy for over 25% of its energy production were European countries: France (75% of its energy production), Slovakia and Ukraine (>50%), Hungary, Belgium, Sweden, Slovenia, Bulgaria, Switzerland, Finland, Czech republic (>33%). 23 Strict regulations have been instrumental in ensuring publics of the safety of nuclear energy across the globe. Humanity's fear of nuclearity is harder to lull because the presence of nuclear waste confronts contemporary civilizations with its own impermanence. The one billion years it takes uranium-235 to decay, and even the one million years it remains lethal, is outside human linguistic horizons. 24 The need to convey potential harm to future peoples is an impossibility, faltering on the fact today’s civilizations and linguistic models cannot survive on the geologic timescales nuclear waste has drawn the planet and its denizens into. 25 For some, the first nuclear test in Jornada del Muerto, New Mexico marks the start of the Anthropocene, a new geologic era in which human activity can be measured in the rock. Humanity, despite the narrowly few humans responsible for nuclearity, is shown its collective irrelevance, even as cries of sustainability drip from the mouths of bureaucrats and environmentalists alike. Sustainability demands managing a system across its lifetime, and we’ve yet to see a civilization going strong after a billion years.