So-called clean technologies such as lithium batteries and electric vehicles, wind turbines and solar panels, are made of minerals extracted from the Earth, manufactured in factories that still use dirty energy, and shipped through a carbon-intensive logistic network. Each of these nodes are sites of environmental harm, violations of indigenous rights, and labor exploitation and repression. 1

Lithium-ion batteries (LIB) are a key technology in the ongoing energy transition. Nearly all mobile electronic products, including cell phones, tablets, laptops, electric vehicles, vapes, E-bikes, hoverboards, electronic toothbrushes, toys, and many other devices, contain a LIB. The technology allows the internal batteries to be regularly recharged for years rather than regularly discarding and replacing exhausted batteries. The first rechargeable lithium-ion battery, sold by Sony, hit public markets in 1991. 2 The new battery provided more power for video cameras, allowed them to be recharged, and made the device itself significantly lighter. These improvements proved popular with consumers and quickly became the industry standard for mobile camcorders.

By 2007, LIBs were becoming commonplace in mobile electronic devices. iPhones and analog wristwatches alike began to integrate them into their product design. Chemists, physicists, and electrical engineers continue to improve on the battery life compared with the weight of lithium ion batteries, a term known as Energy Battery Density, at an estimated 5% per year—innovations that bring longer battery life and lighter devices. 3 By 2022, nearly all battery-powered personal technologies rely upon lithium-ion batteries—from cell phones to cars to personal computers to electric bikes and scooters, to life-saving medical devices like pacemakers. Reflective of their market saturation, the 2019 Nobel Prize for Chemistry was awarded to John Bannister Goodenough, nearly 30 years after he invented the first rechargeable lithium-ion battery. 4 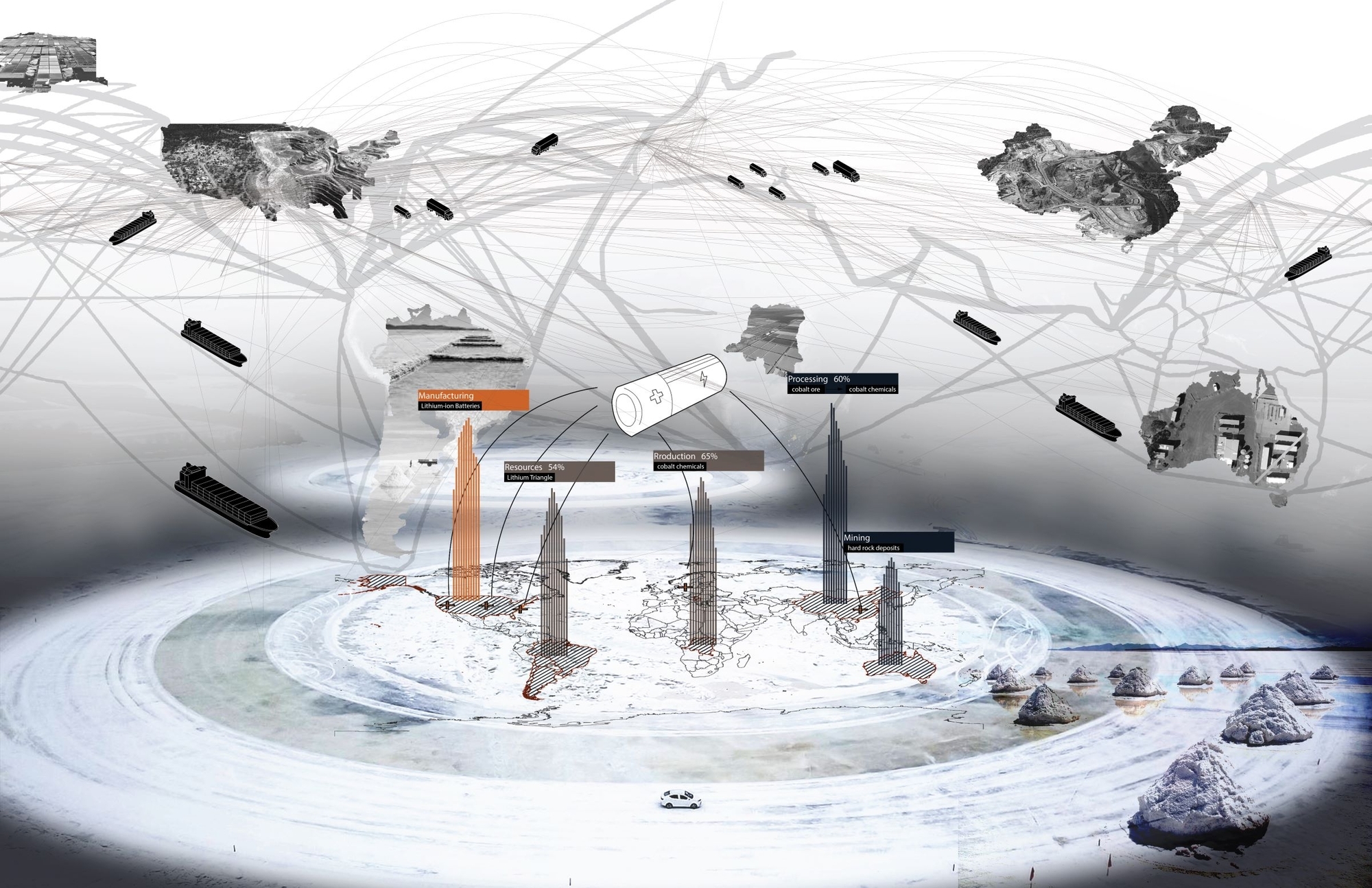 Elemental lithium is ensnared in the globally extractive web of mining, shipping, speculation, and deployment in “green” technologies. Unpacking how lithium mining operations are deployed in similar fashions to oil and gas mining will be imperative to ensure that core technologies of the energy transition (solar panels, electric vehicles, etc.) are not simply greening extractive practices for the 21st century.

For all the praise Lithium-Ion Batteries have received, concerns over their environmental impacts have grown as the core element, lithium, increases in demand. 5 Like other rare-earth metals, lithium is distributed unevenly across the globe. As Thea Riofrancos notes, “Lithium is the third element in the periodic table. It is highly reactive and exists either in compounds with other minerals in rock formations, or in clay deposits, or dissolved as an ion in brine. It is also the active ingredient in the lightweight rechargeable batteries that power electric vehicles (EVs) and store energy on renewable grids. This is why lithium is essential for the coming energy transition.” 6 The largest known deposits are concentrated in South America (Bolivia, Argentina, and Chile), but significant lithium sources are known to exist in Afghanistan 7 , Australia, China, Czech Republic 8 , Finland 9 , and the United States. Australia, despite its relatively low lithium reserves, was the highest lithium producer by tonnage (42,000 tons) as of 2019, followed by Chile (18,000 tons), and China (7500 tons). 10

However, the countries with the highest rates of mined lithium are not necessarily those with the greatest reserves. The U.S. Geological Survey posits that 80 million tons of lithium are scattered around the globe, with South America accounting for more than half of that figure. Bolivia alone holds over a quarter (21 million tons) of the world’s lithium supply. Along with Argentina and Chile, Bolivia is home to what is known as the “lithium triangle”, though only Chile has been successful in establishing a robust lithium mining industry. 11 Argentina and Bolivia’s attempts to capitalize on their natural reserves of lithium have been counteracted by mountainous terrain and US-backed political instability in the region. As recently as 2019, Evo Morales, Bolivia’s first Indigenous president and leader of the Movement Toward Socialism party, was ousted from power through since-disputed claims of election fraud from the Organization of American States (OAS). The claims from the OAS were immediately rebuked by the international community at large as unfounded, but Trump’s White House repeated the false claims, giving legitimacy to the far-right interim government. 12 The Movement Toward Socialism party, whose presidential candidate, Luce Aris, won the 2020 election, was set to nationalize the country’s lithium reserves and to develop a local industry in battery production from raw lithium, a move that upset many US tech-industrialists, including Elon Musk. 13 US industrial interests in obtaining cheap lithium to commercialize green technologies for eco-conscious Americans outweighed the democratic will of the Bolivian people. Morales, shortly after his expulsion from the country said, “My crime, my sin, is to be an Indian, and to have nationalized our natural resources, removed the transnational corporations from the hydrocarbon sector and mining.” 14

Several years after the global (re)awakening to the importance of rare earth elements and the hazards associated with their production, the relationship between its industries and society, broadly defined, remains troubled in practice, poorly-conceived in policy, and under-examined in the social science literature.” 15

Despite national resource reserves, private companies and individual investors own and operate much of the region’s lithium extraction, processing, and shipping network—and they alone stand to benefit from the enormous revenues resulting from increasing demand for lithium ion batteries. The five largest lithium mining companies -Jiangxi Ganfeng Lithium (China), Albemarle (US), Tianqi Lithium (China), Solciedad Química y Minera (Chile), Mineral Resources Limited (Australia)-when taken together have a market capitalization of 67.94 billion dollars. 16 The top three companies rank highly because they own multiple mining operations and production facilities outside of their home countries, whose geographies hold limited lithium deposits. Furthermore publicly traded companies like Albemarle and SQM in Chile have been the subject of lithium-optimistic investors, even as product sales for electric vehicles are not increasing as rapidly as investors might hope. Interest in these markets still remains high, as is evident in the existence of a Wikipedia page entitled “Lithium as an investment”. 17 Lithium mining operations depend on stock market speculation to counteract the long time spans of return on their investment.  The burgeoning market of electric vehicles is fueling continued investment in these mining companies, even as new reports puncture industry myths of clean, sustainable rare earth mining. 18

Commodity speculation creates demand for new markets of lithium, and gives rise to eco-nationalist concerns over lithium sourcing, a concern the Biden Administration is ready to weaponize in the name of the Climate Crisis. Recently, a new mining operation in Utah seeks to provide American-mined lithium as part of Biden’s commitment to fight the Climate Crisis while creating American jobs. 19 The Biden Administration's jingoistic focus on winning an imagined Climate Cold War brings processes of state-making into domestic and international mining operations, creating continued uncertainty for material flows and raw material pricing that will affect where lithium investments occur throughout the world. Lithium is only the latest of crucial mineral resources to have its operations be subsumed by US interests. Manufactured uncertainty, in the form of market manipulation and political destabilization, is straight from the US foreign relations playbook, a playbook that will have to be forcibly retired in order to achieve Global Climate Justice in the 21st century.