The agents of planning are usually boring; the planning process is boring; the implementation of plans is always boring. In a democracy boredom works for bureaucracies and corporations as smell works for skunk. It keeps danger away. Power does not have to be exercised behind the scenes. It can be open. The audience is asleep. The modern world is forged amidst our inattention. 1

For Japanese hydrologists and engineers in the 1950s and 1960s, Tennessee was a familiar word. During the U.S. occupation of Japan from 1945 to 1952, American experiments with democratic control of infrastructure and utilities forged throughout the New Deal began to transmit across the Pacific and into war torn Japan. 2 This included the beginning of an exchange between Japanese engineers working to modernize their country and American engineers enamored with their own work on the Tennessee Valley Authority. Prior to World War II, Japan’s program of isolationism kept much of the country’s agrarian culture in place. Once the war ended and Japan began to urbanize and modernize, a central challenge for its political leaders was finding a way to supply power to its increasingly consumerist people.

The trans-Pacific transmission of engineering expertise was hastened by the 1949 translation of David E. Lilienthan’s TVA: Democracy on the March, the first insider account of the utility’s development over the course of the New Deal era. It helped capture the imaginations of engineers and political leaders tasked with leading postwar Japan into a new, modern era–one that would increasingly become organized around hydroelectric power and similar kinds of industrial-scale energy production. 3 In 1950, plans for development along 16 major Japanese rivers would jump start a national hydroelectric machine that has expanded to over 3000 dams today. 4 Hydropower is part of Japan’s baseload energy production, accounting for 15% (146TWh) of its total energy production in 2019. 5 Hydroelectric is becoming a smaller share of renewable energy as Japan focuses on expanding its solar power capacity throughout the nation. 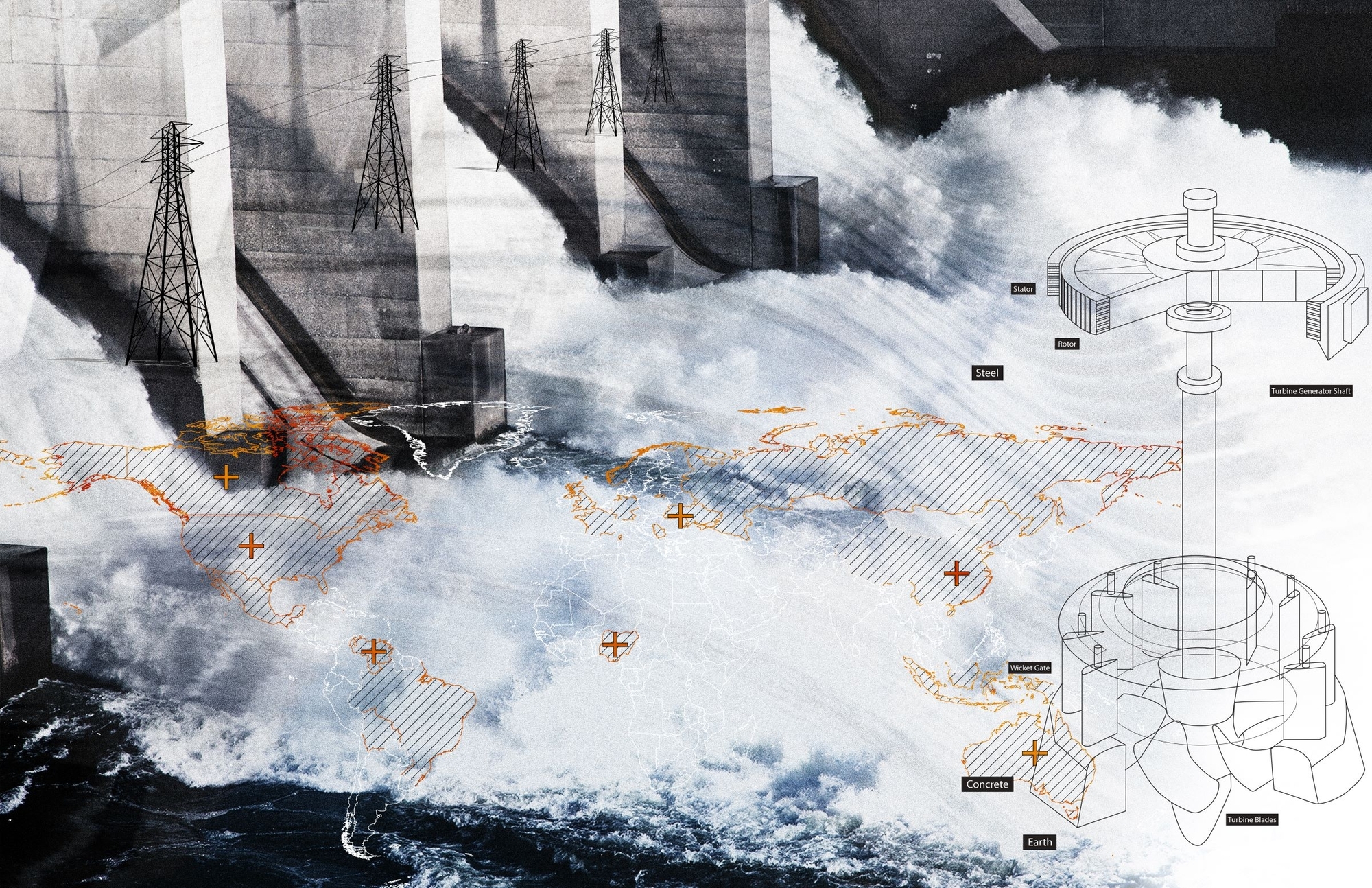 Major hydroelectric projects are dependent on control. Dams require management of entire hydrological systems to ensure a consistent flow of water over the power-producing turbines. These projects have altered riverine ecology across vast territories, displaced Indigenous populations, and converted rural environments into power-producing regions for their urban counterparts.

Japan was not alone in utilizing the TVA model. Lilenthal, director of the TVA project, framed the utility’s ideals and operations as infrastructural models of democracy, positioning it inapposite to Soviet models of modernization well into the Cold War. 6 Lilenthal and other proponents of the TVA walked a fine line in distinguishing how the US-led project was different from other state-backed infrastructure projects following WWII, especially those of the USSR. This balancing act rested on the fact that the TVA was, in part, privately funded, while providing public benefits to the citizens undergoing rapid modernization. Providing infrastructural benefits in the form of public power for citizens through private funding was advertised as a way for people to be part of the power system of the US. David Ekbladh traces contemporaneous ideas concerning how, “a participatory liberal democracy could embrace modernization, to parry the influence of Fascist and Communist models of development, while avoiding the perils of statism.” 7 USSR models, and to some extent those of other European nations aimed at utility privatization, were state-run and thus seen as overburdened by bureaucratization rife with potential corruption in the eyes of TVA proponents. Knoxville, Tennessee became the headquarters of not only the TVA, but of a new global export business: energy infrastructure planning packaged with democratic ideals and liberal economics.

The TVA model became a key American export as the nation sought to spread its cultural and economic might under the banner of “spreading democracy”. Odette Keun writes in her 1935 A Foreigner Looks at the TVA, “the immortal contribution of the TVA to Liberalism, not only in America, but all over the world, is the blueprint it has drawn....” 8 Keun’s blueprint is one of foreign policy, of a plan to combat the rise of Fascism in Europe prior to WWII. For hydrologists and engineers, the blueprint of hydroelectric dams came to represent planning efforts for regional development, a means to bring the power of the river into energy production through extensive planning. 9 Subsequent dams were unable to imitate the balance of public/private benefits. The TVA deployed what Brent Cebul deems, creative competition, a state-backed investment that seeks to open new markets rather than decommodify. In the southern US, expanding access to electricity can be seen as an “effort to create new private markets of affordable energy and consumer products in the vast and untapped regions surrounding it.” 10 State backed investment was not the antithesis of private business but a catalyst for accessing new markets with electric commodities. Weaving together these two blueprints would prove difficult to implement elsewhere as the economic might of private capital began to outweigh public benefits.

On both sides of the Pacific, hydroelectric power became a tool for converting rural water systems into reliable, baseload power for rapidly urbanizing centers. 11 The TVA model proved difficult to apply blankly across different regional contexts, as each river was co-constructed by an array of local relationships. Richard White, traces this story in The Organic Machine, connecting the planning efforts along the Columbia River in the Pacific Northwest to the ecological degradation of Salmon, and the economic and social formations that surrounded salmon runs in the region. For White, the river was the site of energy exchange, as the labor of men, the nutrients of the salmon, and the flow of the river shifted, “no element, no movement could be separated from each other; each to some degree, shaped the other.” 12 The introduction of planning on the Columbia River to aid regional development schemes interrupted the mutability of these once interrelated components; ensuring consistent power during peak times rendered the entire riverine system an object to be manipulated, managed, and secured. In focusing on the decline of socioeconomic world spawned from salmon runs, White is able to refute the claims of Giant Power, a regional and national energy pooling scheme that leveraged energy reorganization as a means of social reconfiguration, whose advocates saw their efforts as a solution to the harmful effects on labor and nature of industrial capitalism. The Bonneville Power Authority, the TVA equivalent in the Columbia Basin, would both promote growth and predict it, operating both as planning authority and boosters for the region's continued development through hydroelectric power. By the 1950s, “planning had become a blueprint for growth; the river had become the machinery of growth” a process whose ecological pretenses would slowly disappear over the next 40 years as the seasonal flow of the river would become completely reversed in order to match peak power demands in hibernal Portland. 13

White begins the conclusion to his book stating: “The Columbia had become an organic machine which human beings manage without fully understanding what they have created.” 14 This sentiment is perhaps reflected most outrageously in the deployment of salmon chutes, cannons, and tubes along the Columbia River, a piecemeal attempt to salvage salmon populations whose migratory patterns have been disrupted by dams erected along the river. 15 The organic machine feeds on itself, disrupting the worlds it sustains even as it seeks to concretize its own longevity. The Pick-Sloan Plan, a joint venture between the Army Corps of Engineers and the Bureau of Reclamation, which created a series of dams along the Missouri River in order to irrigate otherwise arid lands, proceeded to catastrophically flood seven Lakota and Dakota reservations. Nick Estes, in Our History is the Future, connects the Pick-Sloan Plan to past State-led attempts to usurp Indigenous land, claiming, “indigenous land was desired merely so that it could be wasted –covered with water.” 16 Dams, whose power and might come to represent the state and not the local peoples and worlds that rivers sustain, do not have a place as part of the movement towards global climate justice.

Hydroelectric power, itself, is not antithetical to the goals of the Green New Deal, but by leashing it to the runaway horse of neoliberal economics, its ability to intertwine local economies, peoples, and ecologies has been severely limited. The Tennessee Valley Authority worked for local people, providing them a semblance of control in the regional planning efforts of their geographies. 17 In its original formulation, the TVA, through its focus on public utilities and infrastructural projects represented, and to some extent achieved locally, the great hope of modernism: improving the life of the global citizenry through new technological innovations. While designers typically think of modernism as an architectural project of glass-clad skyscrapers, its real, and more completely realized, manifestation was the deployment of new, continental scale infrastructural networks. The TVA model and the global development of hydroelectric models is a kind of energy transition, one that can be studied for its success and failure in the march towards this century’s clean energy transition. The TVA website still proudly claims to be the “classroom of the world”, a classroom that taught the state-backed exportation of the TVA model transition tied to the state-crafting agenda of the Cold-War era US. The politics of the clean energy transition will have to avoid the pitfall of capitalist development and continued domination of western states: a TVA model predicated on exporting neoliberal statecraft has very little to teach us today.