Any day now, our cities will be marvelously transformed into efficient machines. But it’s not so easy to see where you and I fit in. Most discourse on “smart” and “sentient” cities, if it addresses people at all, focuses on them as sources of data feeding the algorithms. Rarely do we consider the point of engagement —how people interface with, and experience, the city’s operating system. 1

Wireless internet is a misnomer. The ubiquity of Wifi in many urban areas has helped obscure the physical infrastructures of the internet. Yet, despite recent plans to provide internet from satellites and further divorce the service from its source, millions of feet of cable and wiring still course through the planet. They rest alongside and beneath roads, across the seafloor, meander to downtown and rural data centers, and feed directly to your modem, sending signals at the speed of light with each loaded page and downloaded file. Writing in Wirelessness: Radical Empiricism in Network Cultures, Sociologist Adrian Mackenzie describes the internet as a “rewiring of the city”, one that, in many cases, rests upon older communication infrastructure. 2 Internet infrastructure often layers atop telephones lines, which in turn were following telegraph lines. 3 Furthermore, internet infrastructure reuses the nodal network of privately-owned telephone infrastructure to house data servers or other larger-than-a-wire infrastructures. In the US, the privatization of internet infrastructure has aided in the obfuscation of its physical presence, an invisibility that continues to undercut the massively life-altering global infrastructural project that has occurred across the past 50 years. 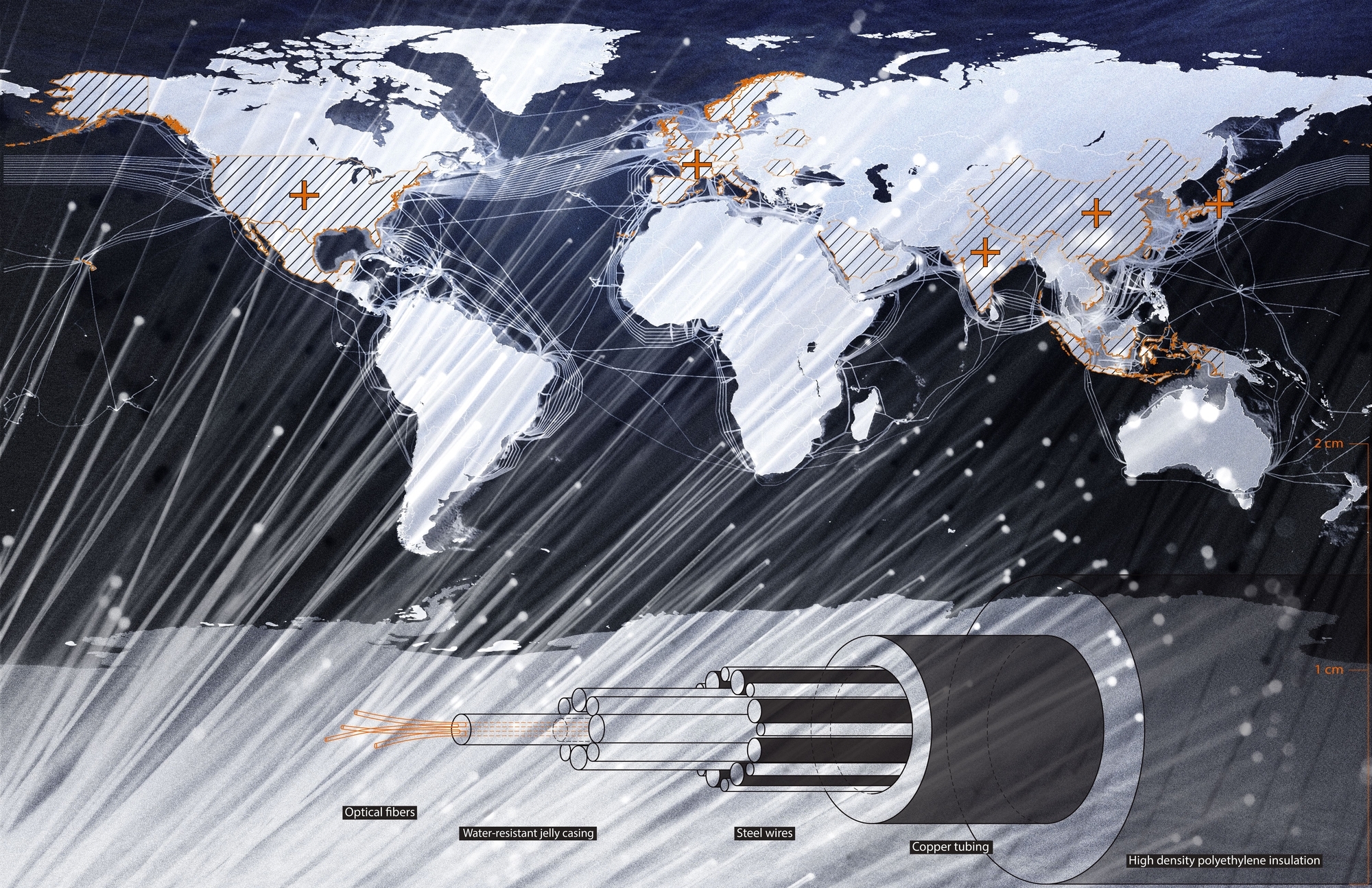 The Internet is a physical thing, with billions of feet of fiber optics connecting modems, data centers, and banking infrastructure together. Foregrounding the material components of these devices, points to the ways in which equitable access can be achieved throughout the world. Internet infrastructure, while still being developed and deployed, represents a global infrastructural project that has rapidly altered both our physical environment and social lives.

Nearly a half-century after the term Internet was coined in 1974 as a shorthand for internetworking, 65.9% of people across the globe have some degree of access to it. 4 The distribution of internet access skews toward wealthier countries, with North America (93.9%) and Europe (88.2%) having the highest rates of internet users and African nations South Sudan (7.9%), Eritrea (6.9%), and Western Sahara (4.9%) the lowest. 5 Reports on internet penetration, or how much of the population regularly use the internet, contain kernels of optimism and pessimism about humanity’s ability to address the climate crisis. The good first: the world is capable of global infrastructural change in a relatively short period of time. The deployment of internet infrastructure has been rapid and imminently global, with much of the development happening throughout the last 30 years. Opening new markets has fueled much of the development, but the deployment of undersea cables, server farms, and fiber optic cables throughout the world is evidence of the global capacity to transform both physical landscapes and social formations at a rapid pace and massive scale.

Conversely, these reports do not reveal the quality of internet access provided, glossing over the disparity between countries, regions, and urban and rural citizens' access to high quality broadband at home. While nation-wide statistics point to the dominance of Western nations, the landscape of internet access within nations is also highly uneven. Take the US for example: nearly 14 million people are not internet users and 24 million people do not have broadband internet access at home. 6 This disparity is often addressed as a geographic one, urban versus rural, but socioeconomic status is a far greater indicator of internet access in the US and globally. 7 8 These studies point to the ability of clients to pay high monthly rates for internet access and telecommunication companies’ sizable return on investment for distributing the fiber optic networks. In areas where underground channels have been dug for other telecommunication wiring, adding new fiber optic lines comes at a significantly lower cost. However, privatized, profit-seeking models are not the only method for fiber optic installation. In Stockholm, government-owned Stokab provides and maintains the city’s dark fiber optic networks from which companies can rent bandwidth. 9 Fiber optic cables are a publicly owned infrastructure in Stockholm, mirroring any other terrestrial infrastructure or utility service that has to reach an entire city’s residents. Increased reliance on the internet to perform a litany of daily and work-related tasks during the pandemic has led some to position access to the internet as a human right. 10

With each further compression of time and space through communications technologies, there's a lot of hopeful zeal that this will be society's turning point...But that hopeful promise associated with an expanding Internet depends on equal access to it. 11

Determining access to the internet is complicated further by the invisibility and illegibility of physical infrastructure. It is much harder to follow an underground wire than a telephone wire. As Shannon Mattern has noted, recent multi-media work conducted on making invisible infrastructural networks legible have the ability to encourage new ways of seeing existing and previously unseen infrastructure. 12 To this end, Ingrid Burrington, illuminates how these unseen networks and their real locations create political formations reflective of the local cultures. In her book, Networks of New York, Burrington examines how banks fight over server space for millisecond increases in speed, how different companies' underground ownership are legible through above ground infrastructure, and the rise of security cameras in a post-9/11 world. 13 Reading infrastructural networks provides insights into the local conditions. The internet’s invisibility feeds into its global potential, while obfuscating local power relations that are formed around its immediate accessibility. Ensuring an internationalist Green New Deal requires understanding these local power formations and being able to ensure that they are not continually leveraged towards private companies and financial institutions. 14